Skukuza Half Marathon –
The Course

A thousand athletes line up at the start on the “village green” and are set off by a recording of a lion roar.

It is early dawn – still dark as race officials set out to prepare the course. Headlights pick out two hyaenas making their way back to a den where they will spend the daylight hours. To the east a jackal calls a greeting to a new African day – the horizon by now a blushing pink, sharply silhouetting leafless late winter trees. A unique place – a unique race – the Kruger Park half marathon held in and around the small staff village of Skukuza in the heartland of one of Africa’s greatest wildlife refuges – the Kruger National Park.

A squad of rangers, whose task it is to ensure the safety of all athletes during the race, travel by vehicle and on foot along the course to herd off any big game which would disrupt the race.

Lets run along the course which this year has changed slightly:

A thousand athletes line up at the start on the “village green” and are set off by a recording of a lion roar. Clockwise once around the field and then along a flat 2km stretch of road which threads its way through the picturesque village, past the quaint church and primary school. Passing between the tennis courts, bowling green and swimming pool the road dips down, crossing a small low water bridge and then climbs for about 1km, passing “Loop-en-Val draai” (where Loop-en-Val Motserauteau fell in a sandy patch during the 1989 race but still managed to come second) and on to the first water table run by SAB who also provide a water tunnel to cool the runners.

The next 2.5km of undulating road meanders back through the village. Impala, warthog and baboon can be seen staring non-plussed at the “herd of runners”. A short, steep climb up “Vossie’s hill” now takes the runners “out into the bush” past the golf club and up along “Lake Panic” dam wall (so named because immediately upon completion in 1981 the park experienced very heavy rains and the dam started filling up rapidly and the Park Warden began to “panic” that the dam wall might not hold) where hippo, waterbirds and a variety of animals coming down to drink are often seen.

At the end of the embankment the second water table comes as a welcome sight (especially on the second lap). The course briefly crosses the golf course and then follows its periphery passing through “Bok doodgeslaan groot geskrik vir leeu spruit” (translated “buck killed by ball, big fright from lion stream”), so named because a few years ago one of the Skukuza inhabitants hit a golf ball down the fairway and it stopped an impala dead in its tracks when it hit it on the head. The player walked up to the impala and seeing it was dead walked away to continue his game! After he had gone a short distance something made him look around and he saw a lioness come up to and past the impala in a slightly threatening manner. Fortunately the lioness preferred the impala to the golf player!

After crossing the stream the course goes up “Rhino Hill”, where a few years ago a black rhino was giving golfers more exercise than they bargained for. He had to be captured and relocated to the Lower Sabie area where he could go about his business unhindered by wayward golf balls. The well kept greens fringed by bush is a pleasant sight to tired runners and “game viewing” along this stretch of the course offers a welcome distraction.

Exiting at about the 6.5km mark onto the village entry road the course drops down towards the starting point. This is a fast part of the course as it is slightly downhill and crowds of spectators line the road urging runners on. At the Nursery School corner runners bear left to start the second lap.

The second lap follows the first lap for 4km and after the little low level bridge at the Nursery, takes a right hand turn further into the village and 1km later joins the Nursery road again. At the top of the Nursery road after a short left turn, the second lap turns right along a sand road where it passes the third water table at about 12km, opposite the elephant, rhino and buffalo bomas (where animals are held for a period before translocation).

The route then goes out on the tourist Nursery road (which is closed to the public for a couple of hours) for about 2km and the turn is just short of the Kruger Gate/Skukuza tar road at the 15km mark. The course doubles back to past the golf club again and follows the first lap until the Nursery School corner, taking a right turn to the field.

Most athletes find the course challenging and are surprised by its undulating nature. There are numerous short but significant climbs and dips and underfoot the course changes between tarmac and well graded gravel roads. Temperatures can be expected to be warm but being August there is often a fresh breeze to cool hot, sweaty bodies.

A unique place – a unique race – The Kruger Park half marathon held in and around the small staff village of Skukuza in the heartland of one of Africa’s greatest wildlife refuges – the Kruger National Park. 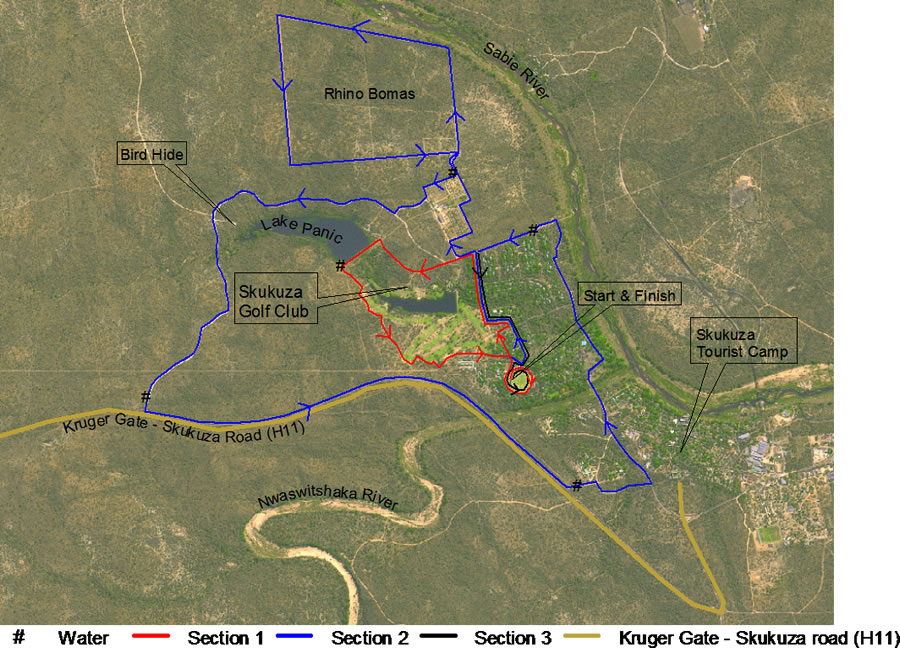